Thanks @stad0203 for the case for C4 Energy Frozen Bombiscle. This was my first C4 energy drink and damn was it tasty. I was always a fan of Bomb Pops growing up so I wanted to give this flavor a try. I think my only other experience with a Bomb Pop flavor was Mesomorph (DMAA version) Rocket Pop. This flavor sucked by comparison. C4 nailed it’s version. It is bold and pretty much tastes exactly like a Bomb Pop. Breaking the flavor down, I think I first get hit with the Blue Razz flavor. Then as I think about the flavor, I sense the Cherry. Then it finishes with a nice iced/frozen lime flavor leaving a terrific taste in your mouth. This is what reminded me most of the popsicle.

I’m not quite the energy drink connoisseur like some are on here. As far as carbonation, I’d say it’s about middle of the road, maybe a little less than your standard soda, definitely more than a Red Bull. It does leave a little syrupy feeling in your mouth kind of like a Sprite. 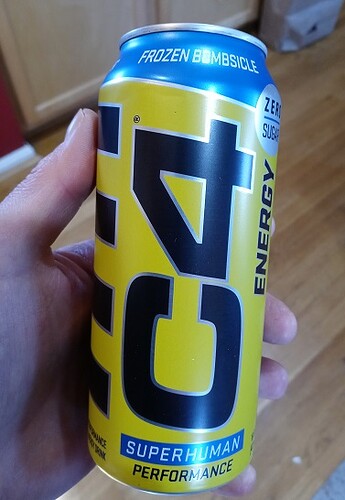 I sipped on it for about 25 minutes taking in the whole energy drink experience. Before I finished I felt the BA tingles kick in slightly. I used it as a Saturday afternoon pick me up to play with my kids. Since I sipped it, I did not get a huge energy rush like from a pwo. Normally I would feel a pretty good rush of energy if I slammed 200 mg caffeine. I did not in this situation. I just felt more awake for a couple of hours. I know this would have hit me harder if I had sipped on it first thing in the morning as the day had already started to take its toll on me. The next can I have I’ll probably drink it a little faster so I can feel the caffeine hit a little harder. And of course this is no Bang with 300mg caffeine. That’ll hit you pretty hard.

I’m not so sold on the formula as citrulline malate and betaine are meant to be taken pre-workout and normally you sip a soda to enjoy it. But this could definitely be used as a pwo if you are in a pinch. I’ll probably save my remaining cans for when I’m truly on the go (longer car rides) or summer afternoons at the lake.

Great job on the flavor Cellucor and thanks again!

Thanks for your review!!

In my opinion these are meant as more of a preworkout . If I want an energy drink, I usually reach for the C4 Smart Energy

Thanks for the honest thoughts

Honestly I use them the opposite. I love the choline from the Smart Energy for my workouts. Especially during my deloads when I wean off stims, any nootropic to help compensate is nice