The astute among you will notice that I have basically been AWOL from the forums for about six months. So here’s what happened.

At the end of April I was minding my own goddamn business and my right leg seized up. After a few days, it had gotten better to the point where I felt semi-comfortable walking and driving, so I took myself to urgent care - the doctor said it was likely a pinched nerve and prescribed me muscle relaxers and massage because I think physical therapy is a scam.

The massages and muscle relaxers helped, but, long story short, it wasn’t just a pinched nerve. 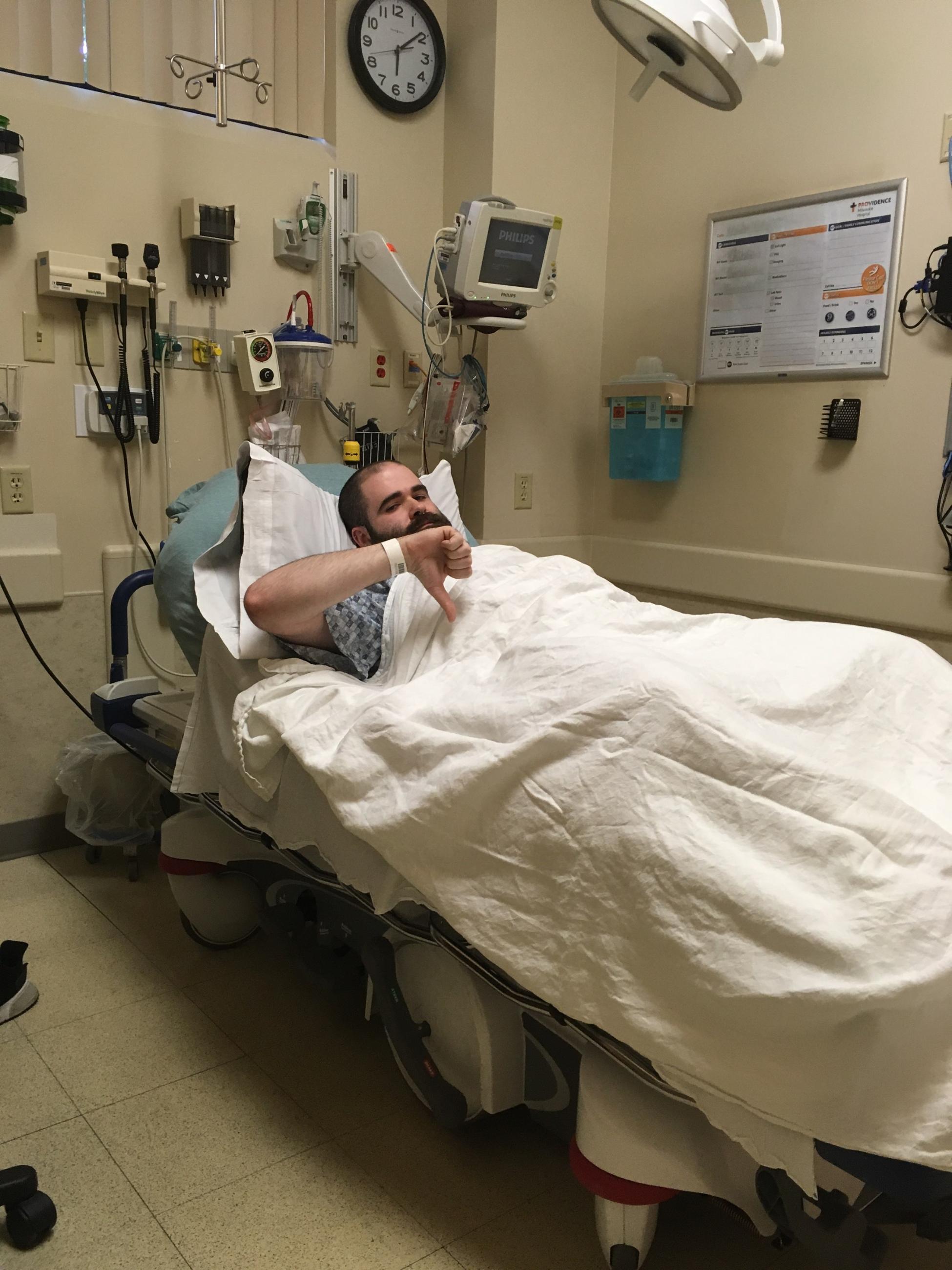 One morning in September, I woke up in excruciating pain and couldn’t move my right leg at all. After a few days of trying to treat it with (legal!!!) weed, acupuncture, and stretching, I found myself in the ER shrieking in pain. Two MRIs later it was confirmed that my L5-S1 disc had killed itself, with the cartilage mostly removing itself from the disc wall. The ER doc said it was one of the worst he had ever seen. 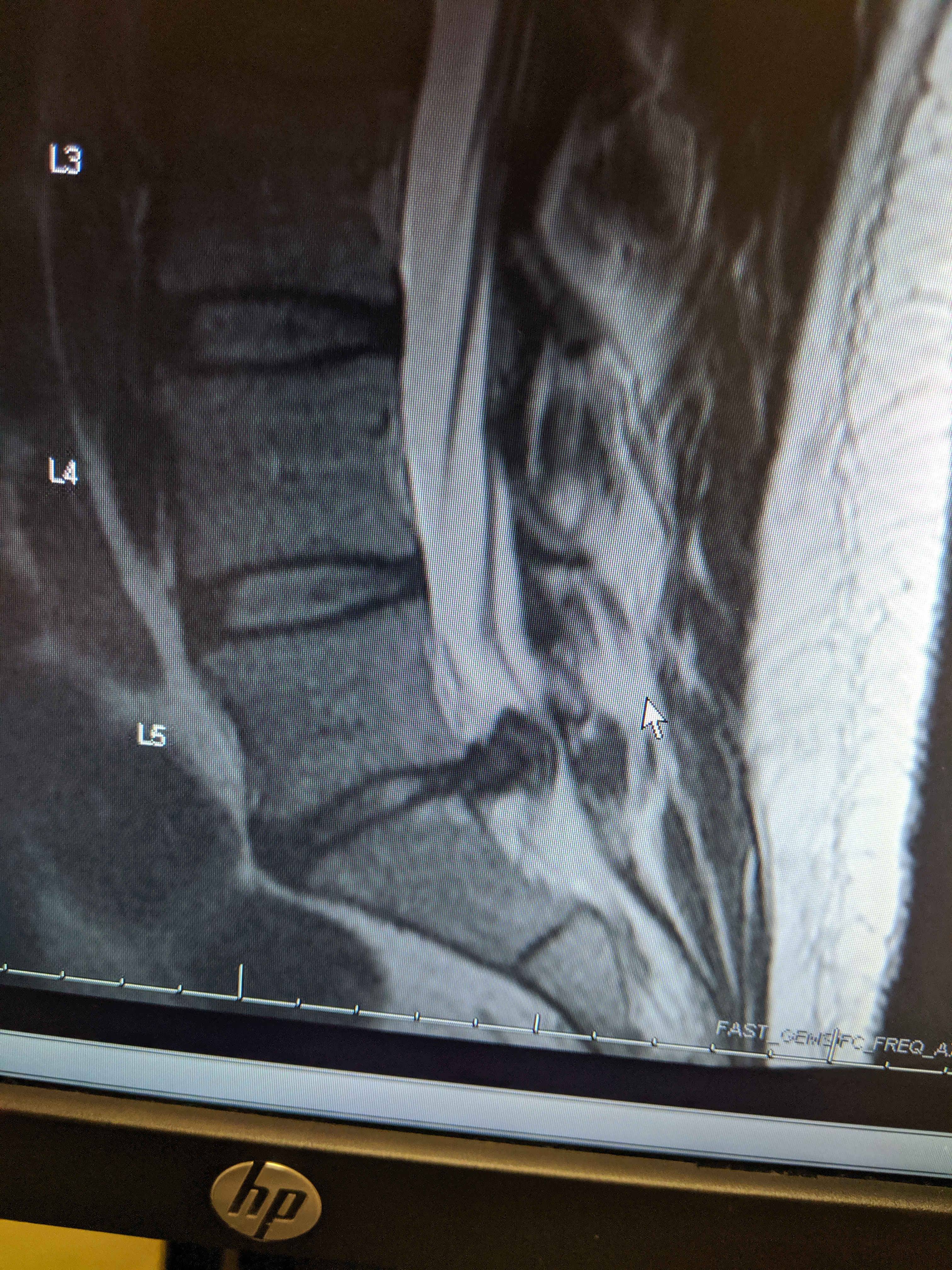 Two weeks and a lot of painkillers later, I headed back to my primary care provider for a consult, who referred me to an excellent spine surgeon. My doctor is very cautious, generally speaking, and said that he is an internist, not a spine expert, and wanted me to build a relationship with someone who knew their stuff in the event that, if it didn’t get better, I’d have someone I liked and trusted I could call instead of being at the mercy of whoever was at the ER.

A few weeks later, the spine surgeon walks into the room. “Now, Mr. Afro-Pope, have you seen your MRI?”
“Yes I have.”
“So you understand why I recommend surgery.”
“Really?”
“I don’t know how you got here and I don’t know how you’ve been functioning for as long as you have. I don’t even know how you’re sitting up right now. I don’t think this will get better on its own and at this point you’re risking permanent damage to your sciatic nerve and your spinal column.”
“Oh. Uh, okay, when?”
“Can you come back in the day after tomorrow?” 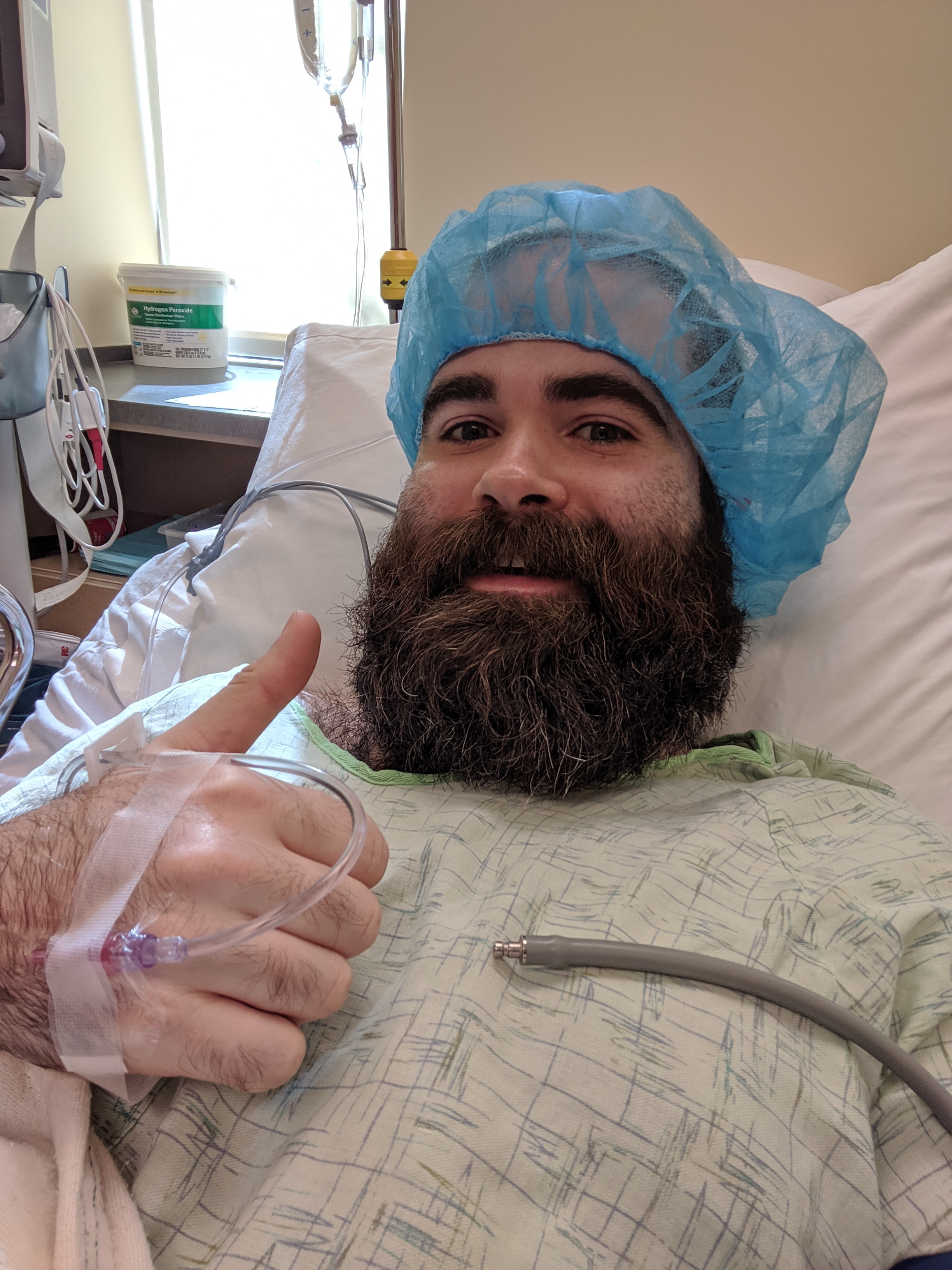 Two days later I had a microdiscectomy. The disc came out in several pieces - it had not only herniated, it had been shredded. I felt almost instantly better, but now there’s a new problem - I have barely used my right leg for seven months and haven’t set foot in a gym in about that long.

I have taken this as a golden opportunity. As I believe my injury was the result of years of neglected biomechanical issues and muscle imbalances, I am working with the fabulous crew at Kabuki Strength Lab here in Clackamas, Oregon, to make sure that never happens again. We are starting my training from the very beginning, starting with injury rehab, and the ultimate goal is that one year from today I will be stronger and healthier than I have ever been. The doctor says I may not be able to squat or deadlift again, but his assistants/PAs/etc have also said they’ve never seen anyone recover so quickly, so not to count those out entirely. That said, there won’t be anything that involves loading the spine for at least another month or so. 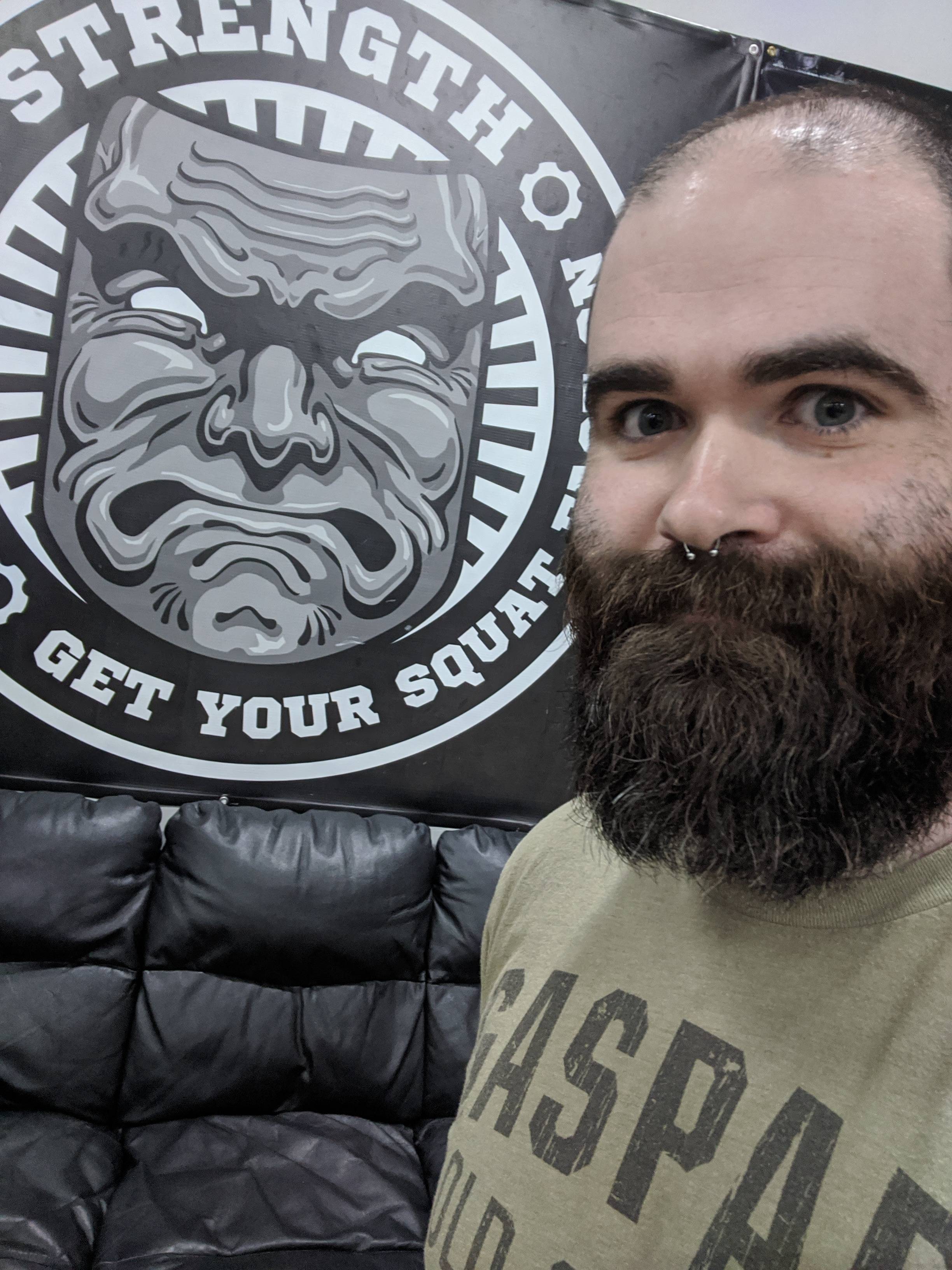 The point of this log is to be fun for me and informative for everyone else - what’s going into recovering from an injury like this, what I wish I had done differently before getting injured, and just because it’s fun to log stuff. I don’t know if the crew at Kabuki wants their methods kept secret, since I’m paying them quite a lot for this, but I’ll be putting as much info in as I can and have time for.

Oh yeah, about the “Afro Pope” thing, I’m clearly a white guy - “Afro Pope” was a character in an indie game I liked in the mid-2000s whose most memorable line was “I respect your beliefs, but that does not change the fact that you are wrong,” which I very much identify with, and I’ve been using it as a handle on lifting sites for about that long, long since before I knew that maybe a white dude calling himself the Afro Pope on the internet was kind of weird.

Anyway, that’s that. Nice to be back in the gym. Today is Day 3, I’ll be training Monday, Wednesday and Friday to start. I’ll keep everyone posted!

Great post brother, thanks for sharing. Sorry to hear about the injury, but glad to hear rehab is coming along. Keep working man, keep us updated

Very interested in updates on this. Get better, friend!

That said, as a physical therapist assistant, i find it legitimately funny that you think PT is a scam but in the same post discuss getting massages and accupuncture instead

Wow, that was a pretty bad herniated disc. I had the same surgery due to a sports injury. Mental recovery is the toughest part; getting over the fear of hurting yourself again

Haha, I think those are hugely helpful! That said, my experience with physical therapy has been pretty poor - generally speaking, I show up, meet with someone’s assistant or their assistant’s assistant, they spend 20 minutes telling me stretches to do at home, and I get a bill for $200 two weeks later. I think the principles and the direct work such as massage, acupuncture, dry needling, electrowhatever stimulation, are all hugely helpful, I just haven’t had much luck with the practice of PT as a composite, if that makes sense.

That’s a pretty good description of a shitty PT practice, yeah. I’m not "no true Scotsman"ing, what i mean is that I’ve seen terrible clinics and that’s a very astute description of them.

My head instructor in college said that the ultimate goal of PT is “loosen what’s too tight, strengthen what’s too weak,” (and kinda begrudgingly added “pain control along the way if you can”) and my current clinic, for all its innumerable managerial failures, is quite good about that–we’d have you doing similar.

Edit: not meaning to hijack the thread lol, was just reassuring that like with any industry (which healthcare certainly is in America) there are those who prioritize quality, despite those who sacrifice it for a quick buck

For sure, and no, not hijacking at all! Yeah, I think my bases are covered.

So, tonight’s workout, such as it was:

Not much, but my core is going to be smoked tomorrow and the sled walks were a lot of fun. We are going light since I am six weeks out from surgery (it feels like so long ago!) But this will eventually turn into a real training log… right now I’m just happy to be back in the gym!

Alright, had my post-op last week. “Miraculous” recovery and we are cleared to start loading the lumbar spine again. Between this and a new job with a standing desk I am going from 0 to 60 really quickly. We have started incorporating farmers walks and longer sled walks into my routine. I’ll post the specifics after workouts once we get more settled in with a routine, right now we are changing things up in light of the good news from last week.

Keep it up brother

Okay I’m trying to go to WEEKLY check ins instead of MONTHLY. OOPS.

So, this month we started adding in minor load to the spine - kettlebell deadlifts, goblet squats, lunges, etc. My strength is coming back quickly, but of course it’s a far cry from where I was even at this time last year. I got my yearly cold around Christmas and missed a week, but otherwise I’ve been hitting it pretty consistently.

We are going to significantly increase volume again this coming month and start shifting towards weight training rather than exclusively mobility work, but I’ll be sure to check in sooner than that.

Alright, I guess semi-weekly and monthly updates are going to be how I do this given that I’m working a much more time-intensive new job and my band is back to playing shows. I’m progressing back into building strength rather than strict injury rehab, slowly dialing down the core-focused work and doing a lot more basic compound lifts - sumo deadlifts with low weight and high reps, transfomer bar squats, belt squats, LOTS of bench. It’s fun looking back at this and seeing how much my strength has already improved.

On the docket for this evening is going to be bench, incline bench, dips, lat pulldowns, and enough lunges to break my legs off (four sets of 25, weighted).