Cholinace™ From Glaxon: Three Sources of Choline For A Maximum Neurological Boost

Your points are like…your opinion.

You’ve digressed to name calling, so I’ma head out.

You’ve digressed to name calling, so I’ma head out. 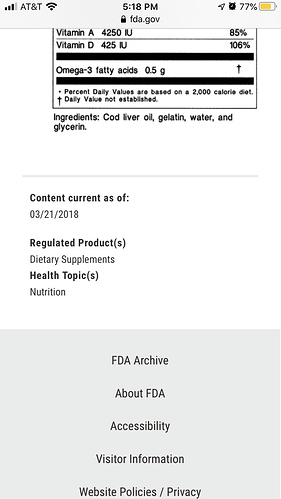 Unless joey is misunderstanding extrabeef’s post, or what strawman refers to I don’t see any name calling.

Going to be polite and call that a weak showing.

Joey, and please don’t take this as me being critical for the sake of it; I’m genuinely curious to get your view on the matter;

Given that IIRC you said Cholinace is 2:1:1 Bitartrate:GPC:CDP (so 250/125/125mg), please correct me if I’m wrong, and that the minimum effective (standalone) doses for CDP and GPC are ~250mg, do you believe that you’ll still get the “unique” benefits of each choline source at these lower doses? I mean, the combined 250mg between CDP and GPC with a boost from a bit of bitartrate isn’t a terrible dose of choline by any means, as far as supplemental choline goes, I’m just wondering if you believe there’s a minimum dose you think is needed to reap the unique benefits from each choline source.

Surely we’re not going to claim that all forms of ingested choline are equal on a mg per mg basis (edit: of choline provided)? For reference:

Choline is a vitamin-like essential nutrient, important throughout one’s lifespan. Therefore, choline salts are added to infant formula, supplements and functional foods. However, if choline is present in a natural form, e.g. bound to phospholipids,...

I’m not saying it’s a BAD idea to add some bitartrate to CDP and/or GPC, it’s not, only that I don’t think it’s accurate to compare the efficacy of GPC to bitartrate based on total mg of choline they supply.

Choline bitartrate may have some cognitive benefits; it does seem less reliable at doing so than CDP or GPC. That said, if Cholinace is 2:1:1 (Bitartrate:CDP:GPC), then 500mg gives 250mg combined between CDP and GPC, which should be a decent doe between the two of them, considering it’s 1/2 of the “minimum studied dose” of each that tends to be ~250mg.

Results showed that participants hit targets more centrally after choline supplementation. Pupil size (a cognition-sensitive biomarker) also significantly decreased after choline intake and correlated positively with the hit distance to the targets and the number of target misses, and negatively with reaction times. These findings point to a choline-induced bias towards action precision in the trade-off between speed and accuracy. The changes in pupil size suggest that choline uptake alters cholinergic functions in the nervous system.

The outcomes of this study may be of direct help to, for example, athletes who can benefit from improvements in motor coordination despite slower reaction times. The current sample consisted of healthy young students with well-developed cognitive performance.

Only few nutrients are known to enhance cognition. Here we explore whether visuomotor performance can be improved through the intake of the nutrient choline, an essential chemical compound in a vertebrate’s diet. Choline is abundant in for example...

No Acute Effects of Choline Bitartrate Food Supplements on Memory in Healthy,...

Choline is a dietary component and precursor of acetylcholine, a crucial neurotransmitter for memory-related brain functions. In two double-blind, placebo-controlled cross-over experiments, we investigated whether the food supplement choline...

So it’s mixed. No mention of if they used dl or l though, not even in the full texts from what I read and searched them for.

@muscleupcrohn Absolutely great points, and I have no doubt that a 500mg dose of Cholinace will have some good noticeable effects, such as the dose in Adrinall. Specimen, on the other hand, has only 300mg, which is where my gripe is, because that is a far lower dose. That’s on me for not specifying

Honestly my biggest issue isn’t saying that it doesn’t have an effect, it’s the fact I feel they are trying to pass off an arguably worse dose of choline supplements as better than either CDP or AGPC in a purposeful attempt to mislead consumers, without any proper evidence of it being superior

I’m genuinely curious, since it seems that Joey is suggesting/stating that he believes that using “suboptimal” doses of multiple choline forms that have unique benefits will provide the full benefits of the “choline sources” (since 500mg Cholinace gives 250mg between the two, which should be a solid lower-end-range-dose) while also still providing the “unique benefits” of each choline source, sort of a “best of both worlds” while trying to keep costs more reasonable than using higher doses of each, which can get real pricey quickly. As to what evidence there is to arrive that this conclusion, well, if anyone would have it, I assume it’d be Joey, since that seems to be the justification behind Cholinace from what I’ve read. And please correct me if I’m wrong, Joey or anyone else.

Yea, it has unique benefits to their profit margins. You would think that a $50 supplement would have nothing underdosed and would come with a proper size scooper

That’s just what a goon would say, evidently.

Or are you just browsing their MSRP D2C prices?

I’m guessing he was looking at the site prices, you can find it for 40$, it is still a nearly 2$ a full serving product that is pretty much just beta alanine and stims.

Phew, that’s dumbing it down pretty hard. You’re not wrong though

Personally, it’s one of my current favorite ‘stim only’ pres. As a powerlifter, it would be regularly in my arsenal as someone not aiming for a massive pump everyday

Sorry $49.99. Yea, I went on their site to simulate their ideal customer, someone who doesn’t comparison shop, ask questions and just does what their told and try’s it . A non “goon”.

Sell me on that $99 male enhancement formula, as a bodybuilder how enhanced are you now lol

EDIT: I’m pretty outspoken on these. If you want to argue the efficacy of it go to @Nappy_Nerd or Justin from Supp Snoop. They’re loving it, I stuck to Flight

I mean compare it to chemix, which is in the same price range. That had full doses of a few ingredients, a high dose of kanna, but otherwise was mainly a stim preworkout, and that got crucified here.

This is basically in the same thing niche, but without the exotic stuff.
How ever good the effects are, its hard to sell a product that could be 90% as good in a 50 cent a serving fat burner.