Picamilon Banned by FDA: More than Meets the Eye?

UPDATE: We now have a copy of the FDA’s official declaration against Picamilon, and we have one last industry response to it. The imminent “ban” seems to be as good as done, regardless of the debate and discussion below. UPDATE 2: On November 30, 2015, the official warning letters went …
(Read More on the PricePlow Blog) 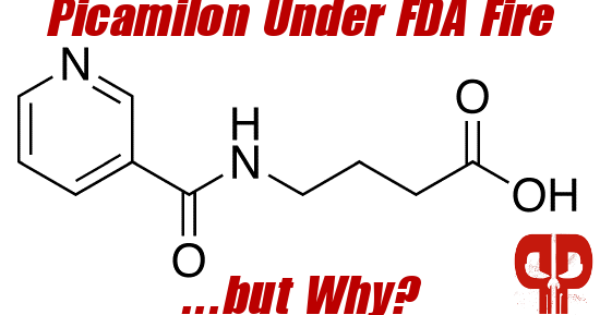 Picamilon Banned by FDA: More than Meets the Eye?

Picamilon is in the FDA's crosshairs due to a new study by Dr. Pieter Cohen. Is there more at stake for the supplement industry than meets the eye?

Absolutely ridiculous, and opens the door for more jack booted thug type FDA tactics. We are VERY aware of the agenda, who's driving it/funding it (BIG PHARMA) and the fact FDA employees routinely rotate in/out of BIG PHARMA.

GNC is being sued by State of Oregon over this and BMPEA. Not for manufacturing it, but for selling it. According to USAToday (I take all mainstream media with grain of salt), there is more to it (Oregon says it has internal GNC documents, how? is my question). Wheat may have a big partner in fighting this.

You are absolutely correct, although we cannot speculate on what GNC will do since we're not in frequent contact with them.

I've been writing an update to our [very out of date] BMPEA article, and have basically spent all day on it. But here are the key bullet points:

- BMPEA is quite likely naturally-occurring in acacia rigidula and acacia berlandieri, although the "official" data is thin and Hi-Tech has stated (in their letter of response to the FDA) that they'll come out with a ChromaDex report sometime soon.

- Comparing BMPEA to an Amphetamine is akin to comparing a Ford Fiesta to a Ferrari. Sure, they both have a car shell and roll down the street -- just as both of these molecules have a PEA backbone -- but the comparisons end right about there.

- BMPEA is likely to be very safe, given that there have been four official studies on products containing it, and over a BILLION servings have been sold since about 2007 without a single death or serious injury ever reported. Not a single adverse event report has been shown by the FDA.

- The above bullet point is where Cohen committed slander, as he stated the ingredient has never been studied. This is why Hi-Tech is suing him.

Do note that GNC caved to the NY AG's last lawsuit attempts, so they may cave here as well. But given that they pulled picamilon immediately, and that they would have a leg to stand on if they wanted to argue for its legality, this is a questionable case.

It seems extremely easy for a politician to get some attention by attacking the supplement industry. You know that zero mainstream press will debate it, and voting constituents (from soccer moms to the elderly) will applaud the efforts. Easy political points at our industry's expense.

Note that we do not approve of any products that contained BMPEA but did NOT have it on the label. That's illegal and those companies can and should be punished with the full extent of the law.

That's what's freaking crazy here. There's SERIOUSLY adulterated stuff out there that nobody is talking about. And the press is going after two ingredients that aren't even on the radar when it comes to public safety.

Stay tuned for the blog post. It's taking a long time to put together!

Thanks for reading,
Mike

Oh, and the internal documents seem to be about "No NDI available for Picamilon". But if they were to fight this, they'd use the case that picamilon is a COMBINATION of two other legal ingredients (as Wheat pointed out), and may not *need* an NDI.

All speculative armchair lawyering there. Wouldn't be surprised if GNC just settles.

All over a Niacin and GABA molecule. Jeeeeeez.

Picamilon is made from a natural amino acid called (Alpha amino butyric acid) that is found in wine, beer and bakers yeast then it is combined with vitamin B3 and FDA calls this a chemical?. I have used Picamilon for over 18 months with no issues.

Fatal Drugs Allowed (FDA) should be abolished. The FDA is probably THE most corrupt branch of the federal government, and that's saying a lot. It's a revolving door of approving controversial things (like those of their best buddy Monsanto for Nutrasweet and RoundUp for instance) and then the director of the FDA getting a cushy lifetime job at said corporation, while banning anything healthy (like roquefort cheese and unpastuerized milk as well as herbal ephedra for weight control), because it competes with the bottom line of Big Pharma, by improving the health of the Collective Cash Cow (us). Round" that up with Monsanto's and Franken-vegetables that are completely devoid of nutrients and contain spider and rat dna. And Senomyx used by Nestle, Kraft, Pepsi, Little Debbie, Heinz and many others that contains crushed livers from aborted fetuses kept alive by Planned Parenthood until time to cut out their organs to put in our food supply. Oh, lets not forget the Fluoridation (industrial waste products) SCAM around the world that is killing the population slowly with poison the governments let their Big Corporate masters dispose of FREE OF CHARGE into our drinking water. Win Win for them, Lose Lose for us (as usual). It's painfully apparent that they don't really care 2 beans about public safety.

Oh and I almost forgot, the ROAD KILL and euthanized veterinary animals they melt down into fat to use in our TOOTHPASTE. Yeah those hypocrites REALLLLLLY care about our safety! What a load of bull S#%t

FDA's self righteous hypocrisy is utterly revolting and is becoming so obvious to everyone, even those who still believe that mainstream news doesn't lie to them continually.

So wondering, is this basically an official admission that picamilon works? Is it still available around the place?

Typical americans demonizing any product out of Russia/former USSR. This is why you lot are popping Xanax like sweets and yet you have much safer alternatives like Picamilon etc unable to obtain FDA approval. Shows how much of a grip your pharmaceutical and military industrial complexes hold over every single one of you.

I hate so much how very right you are

You are WRONG !!!! -- when Niacin is artificially bonded to GABA it is no longer natural and a separate compound, even though it breaks apart into the naturals in the body through metabolism.

This means it is NOT A DIETARY INGREDIENT, Its a separate new artificial compound called Picamilon

With this said, Picamilon should NEVER be banned, it should be freely sold for consumption.

With this said, nothing should ever be banned, thats Authoritarian and Authoritarianism is rooted in Darkness & Evil where as Liberty is Rooted in Goodness and Light. We arent under common law, We should be. Thats where nothing is illegal unless it harms other people or their property.

All Authors and Commenters have low IQs plus confusion, I dont know why.

I just purchased E.S.P pre-workout last week and tried it for the first time today, and so far I'm very very impressed with it. I noticed it had picamilon in it which I hadn't heard of so I googled it and found this article. Either way this stuff is amazing, and f*ck the FDA. Bunch of pricks who cater to whoever pays the most money to determine whats "good" for America.

Sad. This stuff works. Suffering from an anxiety disorder is rough. Especially when all you have is uselless FDA approved SSRIs and (highly addictive) benzodiazapines, which do nothing to actually increase GABA levels. Its all just about power and control.

Picamilon is dear to me. It's the only thing other than ibuprofen that keeps me migraine free. Ibuprofen is so bad on the stomach, I hate using it, but picamilon has no side effects! It's very frustrating what the FDA does in this country. Why haven't we done something? Isn't there a loophole or an obscure law somewhere that makes them illegal?

When are we going to stand up for ourselves and take our country back and be able to put what supplements in our bodies we want? Big Pharma needs to be violently dismantled.

Big pharma profit and greed at work to remove low cost health options, such as picamilon for ADHD symptoms and for anxiety. I imagine Cohen gets kickbacks of some sort for pushing the hidden agenda fight to protect pharmaceutical profits from readily available natural supplements.

This is a safe product that supposedly competes with amphetamine based supplements, while being as or probably less harmful than aspirin. I'd wager if we'd look closer big pharama probably cut a cheque to the poor guy to rid public of this cheap and useful substance. my friends are complaining that it has disappeared and they are not ready to use toxic psychoactive wares peddled by big pharma.

Gaba is depleted when people use heroine. If anything there is a heroine epidemic and gaba can help more people fight withdrawal. If we are putting the conspiracy theory/speculatory hat on--perhaps xanex doesn't like a much better form of anxiety medication that they can't patent protect. Alternatively, who else may have motive to increase heroine use and increase anxiety? Perhaps the CIA using drug sales to fund black ops--or worse, foreign interest intelligence trying to deligitmatize US into a 3rd world country---or perhaps major drug cartels with an influence in US politics. It almost certainly has to be a major player.

I usually favor "incompetent theory" first if incompetence can explain the decision, and then either "coincidence theory" or "conspiracy theory" next depending.
**If the motive and opportunity AND high individual upside with high probability of not getting caught is there... suspect people to act and even conspire if necessary. If any one of these variables aren't in place and there's no chance incompetency is in place... assume it is a coincidence until proven otherwise.**

In this case it is difficult because the ingredients for a conspiracy are in place with multiple large players having high motive... but incompetence probably would also explain it. And even if you suspect conspiracy how do you know who? I listed at least 3 groups just off the top of my head and there's no reason there would need to be more than one.

1)There's no reason this would raise a red flag unless the FBI studied law as well as medicine and intelligence if it were a drug cartel or foreign intelligence/counter intelligence agency.
2)Even if it did... If this is corruption at the highest levels of governments any investigation could possibly be derailed while everyone else is either compartmentalized or follows orders to derail investigation.
3)There'a nothing preventing those with means and opportunity to attempt to infiltrate the FBI and CIA. Perhaps they wouldn't be successful as there are undoubtedly counter measures in place, but to get one individual high enough up or seemingly irrelevant (overlooked) enough to look the other way or hack a computer at an opportune time just once to create a study that leads to a result that leads to a conclusion that hen influences a ruling seems hard to defend if you assume the group behind these attempts to be powerful and/or determined enough.

Then again-- maybe I should just stop watching shows like Narcos and Breaking bad and house of cards. :-)