BREAKING NEWS: On Wednesday, January 28th, 2015, a class action complaint was filed against MusclePharm for alleged deceptive label claims in the Arnold Schwarzenegger Series Iron Mass weight gainer product. Update – Feb 4, 2015 – We now have Exhibit A, which shows the plaintiff’s lab tests. They are discussed …
(Read More on the PricePlow Blog) 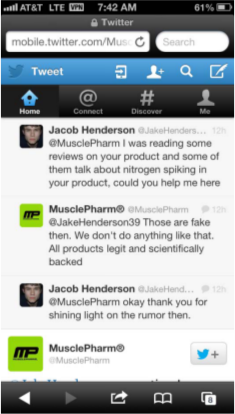 19g of bounded protein? Meaning that out of the listed 40 there is only 19g of true complete protein and not free aminos? Ouch..

Correct. I updated the post - I explained this better in past posts, my mistake there. That's the claim, at least...... still interested to see this actual lab test.

If Arnold owns >5% of the company, then we would know if he had sold or purchased shares, wouldn't we? Because he would have to file with the SEC as a major shareholder, and there haven't been any filings on his behalf that I have been able to find.

So what you’re saying is that the amino matrix added to Arnold Iron Whey is being done for one of two purposes: either the aminos are in sufficient enough quantity so it spikes nitrogen for the purpose of overstating the protein claim, or the amino matrix is merely window dressing, in other words, it’s in such insignificant quantity that it doesn’t spike nitrogen but also doesn’t benefit the user. So MusclePharm is either outright lying about their protein claim, or they are telling the truth and just trying to fool the consumer into believing the product is better than it actually is. The question we’re asking ourselves here is not whether MusclePharm is lying to customers; it’s how bad is the lie!!!

Why not be truthful? If MusclePharm believes that adding aminos to their protein will give added benefit, why don’t they add them in significant quantities so they actually benefit the user and then back out the nitrogen from the testing and make a legitimate product? Knowing that MusclePharm is putting aminos in the protein to just fool you, isn’t that almost as bad as protein spiking itself? A product is either legit or it’s not. A brand either respects its customer or it doesn’t. There is no middle ground.

Some of you know who I am, so before you start slamming me, let me admit that I do own one of the oldest supplement brands in the industry. So be it. It doesn’t mean what I’m saying is bullshit. I started writing about protein spiking many years ago and I’m happy that this scam is finally starting to catch the attention of consumers. I have 370 supplements currently on the market, not one has a proprietary blend listed on the label. I banned the use of proprietary blends on my supplements way back in 2001, they are used for one reason only – to deceive the consumer. I have never amino spiked, I have never used WPC34, WPC60 or WPC75, prosweet, sweet whey, dairy creamers or any other bullshit gimmicks to bring down the cost of my protein, and I have never fairy dusted my supplements with under-dosed ingredients. I think brands that use these deceitful tactics are nothing more than snake oil salesman.

I can tell you with or without this lawsuit, this company is shady. I purchased the Iron Mass product in a 5# container which is all they offered. No smaller sizes, no samples to try, etc.
It tasted HORRIBLE. Texture and taste were offensive.
I tried to return it to the store for EXCHANGE for something I knew I liked ( almost anything else would do..) and they refused saying they couldn't get their refund.
I looked on the container for a phone number to MusclePharm - nothing.
I went to the web site, finally found a contact number, called the company and got some low life, poorly trained, ignorant moron that wanted to argue with me.
My statement is simple: This stuff tastes terrible, I've tried to fix it up with various additions and still it's just NASSSSTY.
His response was 2 things:
1) We do not guarantee taste
2) I use it and I think it tastes fine.

They get your $60 and it's basically 'screw you" PLUS now they have been busted for cheating on the labels.
This is good reason to NEVER EVER do business with this company EVER.
I hope they go out of business and crash in flames.

Any additional follow up? I'm curious about the whole glycine thing, I thought even their own testing showed it to be ridiculously high (on a phone, hard to flip tabs to verify), and the FDA supposedly clarified that protein was supposed to only be complete bonded protein sources. Any additional outcome from this case? I know lawsuits can take forever, but all I can find is the accusations from months ago, no follow up on the lawsuit or anything.

Unfortunately, there's been no follow-up responses but we'll try again. Usually everyone's quiet during a case (either gag orders or just don't want to taint the case).

The good news is that you can now look up the contests of each MP protein tub on their MPSSI site.

Do you happen to have a true 3rd party lab result for Arnold Iron Whey?

I picked up the 5# container Iron Mass today and it tastes good, no where near horrible or nasty.
Generally, I hate restaurant /fast-food milkshakes because they use artificial flavors. Iron Mass tastes better than those milkshakes majority of Americans do not have any issue with.
Texture is about the same as other top-rated protein powers I've tried. It mixed well by hand and spoon with cold water/milk.