Note: In 2019, GlycerPump was renamed to GlycerSize. GlycerPump is a new, stable from of 65% glycerol powder made by Pinnacle Ingredients. Enhanced hydration, increased stamina, super-saturated muscles, and tubs of clumpy pre workout. What do these four characteristics have in common? They’re all attributed to glycerol. Yes, the ingredient… …(Read more on the PricePlow Blog) 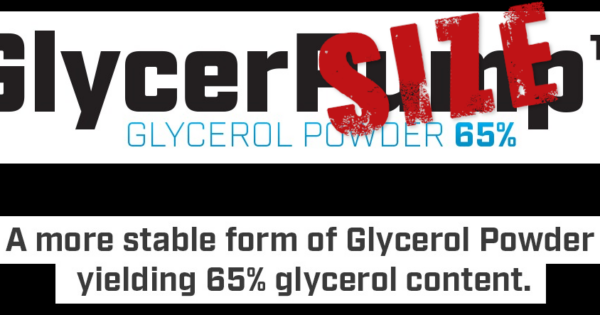 GlycerSize (GlycerPump) is a stable from of 65% glycerol powder made in Australia intended to prevent clumping and improve texture in supplements.

I really hope this lives up to the hype so companies stop using GMS and hydromax, those ingredients have ruined like 5 preworkouts I own.

Seems to be doing well so far, from my experiences with it.

In writing this article, I got to chat with the owner of Pinnacle Ingredients and learn a little more about the whole process and what goes into it.

Glad they figured it out so it’s not so hygroscopic. Now let’s get companies using the correct amounts

Okay, I need an adult.

I know GMS and HydroMax were different in terms of their function but I can’t figure out how. There’s a dosing protocol for taking X-Factor Advanced that calls for taking GMS and L-Carnitine with it, and I remember telling folks I was taking HydroMax (CL GlycerGrow 2) instead of regular GMS (CL GlycerGrow) and having it explained to me that they weren’t the same. I have long since forgotten all of that information. How are they different, and how is this different than those two?

The GMS is supposed to act as an emulsifier for the arachidonic acid. Basically an emulsifier should help it mix with water, and would thus aid the absorption, or at least that’s my understanding of the whole process. “Regular” GMS is generally 25% actual glycerol or less, the rest being the stearic acid (the “stearate” in monostearate). The whole idea with HydroMax is that it’s a higher yield of actual glycerol. I’m not sure if it’s still bound to stearic acid though, I’ve always just assumed it was, but just processed differently to give it a different glycerol to stearic acid ratio, but I’d have to double check on all that. Anyway, the theory was, since stearic acid is (I think) a saturated fat, by having a lower amount, it would mix a lot better. I think it does, but still not great. The other problem is that it still clumps up in powders. Honestly, I’m not sure why people thought it would improve powder clumping, if it’s more water soluble, I’d think it would attract more water, but what do I know? Anyway, it seems that with GlycerPump, they don’t use the stearic acid at all, but silicon dioxide, which is actually a fairly common anti-caking agent. That, coupled with the “spray-drying” its supposed to be more stable than either of the first two and not clump up your preworkouts. As far as arachidonic acid is concerned, I’ve assumed it’s the glycerol portion that will help the solubility, which would mean these are all interchangeable from that perspective. That said, I’m not 100% sure on that.

Reached out to Pinnacle for some additional info:

This article might be slightly useful for understanding the bond between glycerol and fatty acids in GMS What Is the Function of Fat Cells? | Livestrong.com "

Hydromax is bound to silica.

If the stearic acid does work as an emulsifier then that would make sense for why they suggested GMS over HM.