Huge shout-out to @stad0203 for hooking me up with some C4 Smart Energy!

Truth be told, I have not been a consumer of many carbonated products from supplements companies. In the past, I have purchased many of White Monster Zero Ultra cans, so that will be my best resource to use as a comparison.

I’ll spend a little less time reviewing the ingredient profile since it is not a typical pre-workout product but I will touch on a couple of things. Firstly, the use of Cognizin® is a great choice. This ingredient has been a favorite of mine ever since using it in Komodo Katana V2 long, long ago. There are multiple studies to support this ingredient I.E. improvement in motor speed & attention. This ingredient, paired with 200mg of caffeine, provides a perfect combination of focus + energy.

My one gripe that I have with Cellucor is that they still use N-Acetyl-L-Tyrosine which is inferior to L-Tyrosine. 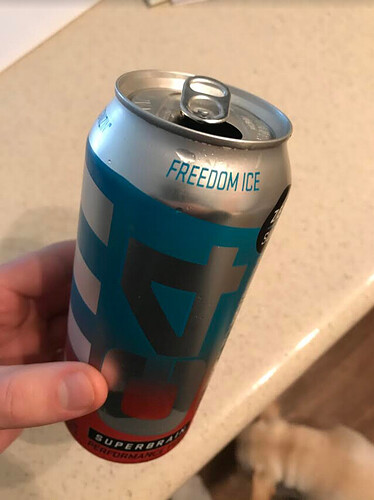 The flavoring of these cans is so good that I had to keep the few that I could - my girlfriend discovered how tasty the Freedom Ice flavor was and took more than half of them! Very refreshing blue raspberry flavor with a hint of some lemon. They are also carbonated just enough but not too much compared to another supplement company’s take on carbonated drinks.

In conclusion and with comparison to the other canned drink that I’ve had plenty of, C4 Smart Energy blows it away in terms of performance. The mental acuity boost that I’ve noticed has been fantastic for either the gym or just trying to increase my focus while doing work. This combined with the taste was a home run for me and lands this a 9/10 rating.

Thanks for all the details in the review!

Agree, great review. Freedom Ice was definitely a sleeper hit for me, I’m usually not a huge fan of bomb-pop flavors–I don’t dislike them, they’re just OK. This was great though.

Appreciate it, my friend.

Agreed on the bomb-pop flavors… an over saturated option. I think it was Mesomorph that really started the trend and then there were 100s. But as you said, Cellucor did it right.

Now go try yourselves the Black Cherry and enjoy!!! My favorite flavor in the Smart Energy line to date!