For disclosure, I received a case of product from @stad0203 in exchange for an honest review.

I’m a big fan of C4’s carbonated line, particularly their Smart Energy line, though I can’t have those too often, as routine choline supplementation gives me brain fog. I’d say that energy drinks have 3 main components–taste, ingredient profile (usually just how much caff they have, but products are getting fancy now), and effects, so that’s what we’ll talk about.

TASTE
I chose Orange Slice because it’s the flavor I love most out of the ones I’ve bought (quite a few). It tastes like a half-and-half of Diet- and regular Orange Fanta. Sweet and bubbly with a VERY strong orange soda or candy flavor, and only a hint of aftertaste from the artificial sweeteners. In my top 5 favorite energy drinks as far as flavor goes. 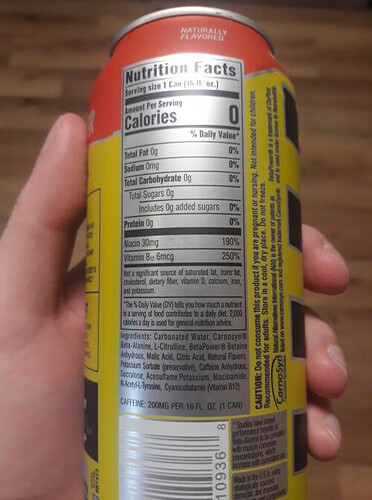 …Huh. C4 Energy was never transparent, but it did at least used to have a proprietary blend with total active ingredients weight listed, right?
Why’d you guys remove that? I hope it wasn’t for NEFARIOUS PURPOSES, but I really have no idea, like all I can say about this is that it has 200mg of caffeine, and More Than That of beta-alanine. If you guys didn’t cut the ingredient dosages, I think disclosing the total amount of actives makes for a much better label.

EFFECTS
As promised, it energizes! I’m a big fan of higher caffeine drinks, but I do like using these instead of a morning coffee when I’m dialing it back to the level of mortals–I don’t like going as low as the 80mg or 160mg in some other drinks. I don’t utilize it as a preworkout, as I don’t like carbonated drinks before lifting, so I can’t speak to the efficacy of the actives in terms of pump or endurance, but I do know they’ve gotten me through three 11-hour shifts over the past 3 days, so I’m pleased.

Overall, if you love orange soda as much as Kel and I do, I think it’s absolutely worth snagging a couple singles and giving them a try, I can’t imagine you’ll be disappointed.

(i’ll x-post to the website tomorrow, i have…another 11 hour shift in the morning

Thanks for the review!

Label was simplified since its more mass market now (gas stations and grocery stores) but the formula is still the same.

I appreciate these reviews

Great choice on flavor, this and Midnight Cherry just amazing! If you ever get to try the Smart Energy line of Black Cherry, yeah you will love it!!! Assuming you like cherry flavors that is lol!

Orange Slice is an OG classic from C4. They nailed it.

Great review
Still one of my favorite flavors