Got some BEAM samples for @TheSolution. I’ll post my reviews here.

Today I tried the Whey Protein Salty Peanut Butter. Here’s how it mixed up. 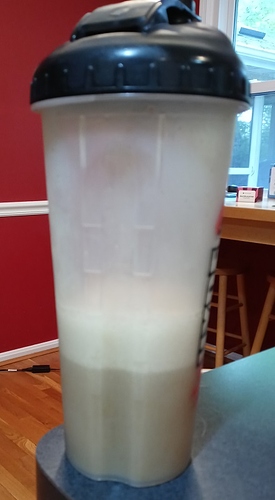 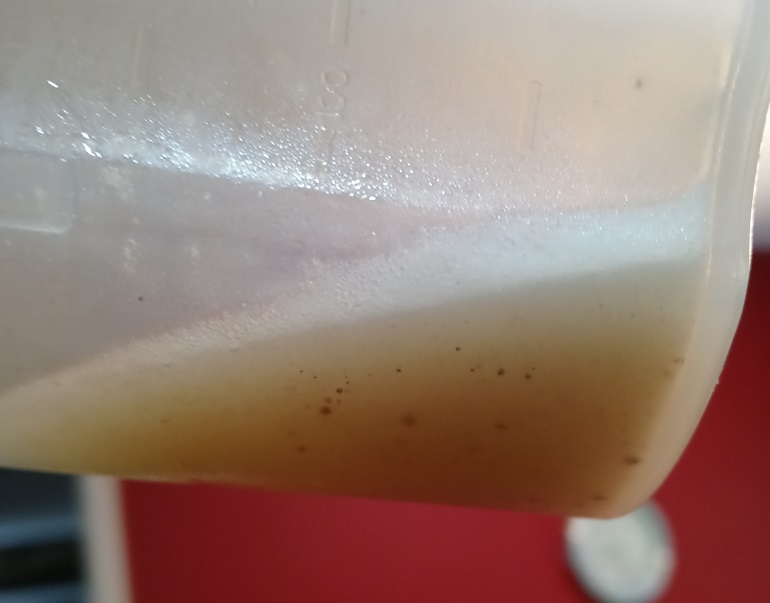 You can see there are some left over particles. I was told that these are trace mineral flakes and are to be expected. They do not take away from the taste.

So I’m scratching my head a bit about the name of the flavor - Salty Peanut Butter. The Solution said it was named after a certain ice cream flavor that has some chocolate in it to. So the name is totally misleading. The powder smells like Reece Pieces. If you have ever smelled PES Select Peanut Butter Chocolate Cup, it smells a lot like that. But the taste is a little different. It is heavier on the Peanut Butter side. I’d say 70:30 Peanut Butter to Chocolate. It is very tasty. With the chocolate flavor, I just am not getting that saltiness. Maybe I’m just not attune to it. So I’m going to describe it as a sweet peanut butter with a little chocolate added in. It mixes normal - not thin, not thick. 9/10

Everyone is subjective to their own tastes and products, but this is why I send out samples for reviews. Overall seems like you really enjoyed it, but hopefully the comment i posted makes more sense for you now.

So he is saying they didn’t put any chocolate in it but you are saying the opposite. Which one is it? I’m definitely tasting chocolate.

I pick up the chocolate in the backend, because the base of the Jeni’s flavor does have it
Hence the picture 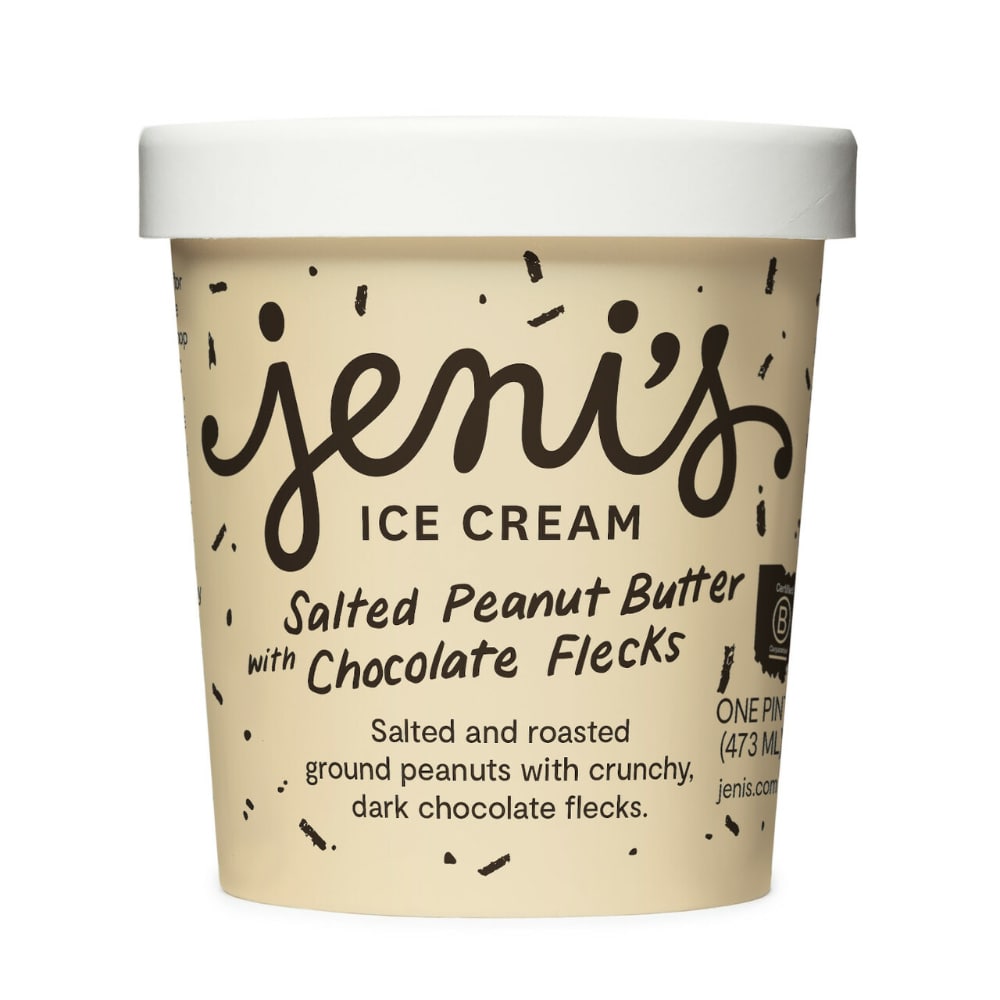 The company took the base ice cream peanut butter portion and replicated it into the ice cream. There is no direct added chocolate or there would be cocoa that is why peanut flour is on the ingredient profile list… After scooping that flavor prob 10 times I do notice a bit of it in the protein powder. But as you know taste is subjective.

Thanks. And yes, I definitely enjoyed it!

When in doubt, sprinkle in your own Sea Salt. I’ve actually started doing this for many protein shake flavors, and it’s quite amazing.

Got my package from @TheSolution yesterday and tried the Beam Vegan Blueberry Muffin today (thanks for the extras!!!). Put it in a shake bottle with some cashew milk and it mixed smooth. To me, it was close in taste to a blueberry muffin. I liked it much better than the other two blueberry proteins I’ve purchased in the past. Gaspari Precision Blueberry Muffin and Ghost Blueberry Pastry. This was much closer in taste to what I expected than the other two I’ve tried. I would definitely purchase a full tub of this; It is on my list, I’ve got some other protein to get through before I buy more.

As I try the other samples, I’ll add more posts with my feedback.

AWESOME!
Keep the reviews rolling.
If you guys want to purchase full size tubs of the products BEAM be amazing has premium supplements of whey protein, vegan protein, pre workout, collagen, and super greens supplements for men and women. One of our co-founders beat cancer and attributes beating it by taking premium high quality supplements.

Yep, the Blueberry Muffin is spot-on and superb.

For me, it’s side-by-side with Ghost Blueberry Pastry a favorite. The latter’s tartness and sweetness is crazy-different, haha, but I enjoy it in its own way.

I tried out BEAM Vegan Protein - Blueberry Muffin today. Here’s how it mixed up. 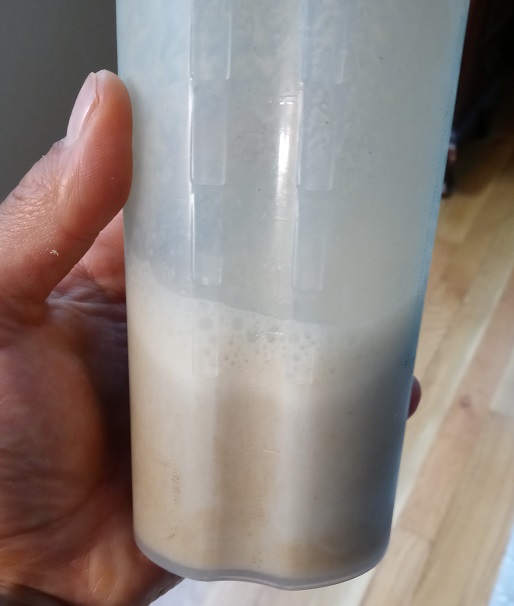 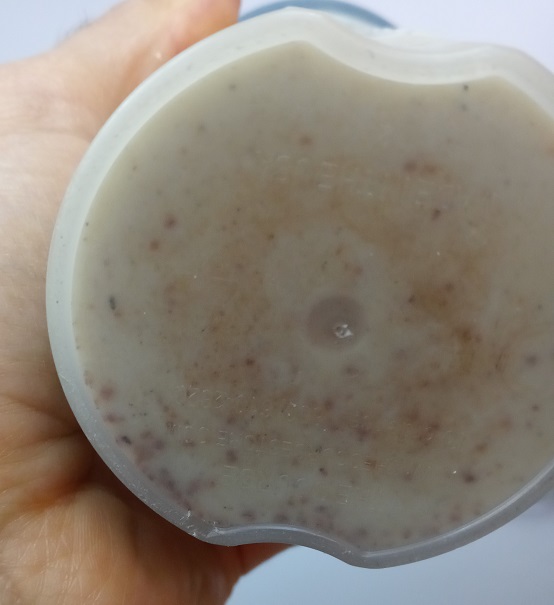 I’m assuming the particles are the trace minerals again.

I haven’t tried a vegan protein in awhile. I’d say the flavoring has improved but is still not close to a whey protein. You still get that mouthfeel of a plant based protein. But you don’t get that dirt taste. If you didn’t know this was a Vegan protein, you would probably be turned off by it. When you first drink it, it tastes kind of watery. There is no pop to the flavor. I mixed it in 8 oz water. The subtle flavor you get does indeed have a good blueberry muffin taste but IMO it’s not very strong. After you have swallowed it, you do get a nice strong blueberry muffin aftertaste which is enjoyable. You definitely have to wait for it. Maybe mixing it with 6 oz water or even milk might make it better. If you had to go Vegan, I’d say this would be a pretty good option.

For someone who doesn’t do vegan proteins its going to be hard to compare to other brands on the market. Whey and isolates will always taste far better just do the ingredient profile.
Truly appreciate the update!

I tried BEAM Vegan Protein - Chocolate Brownie this morning. Here’s how it mixed up. 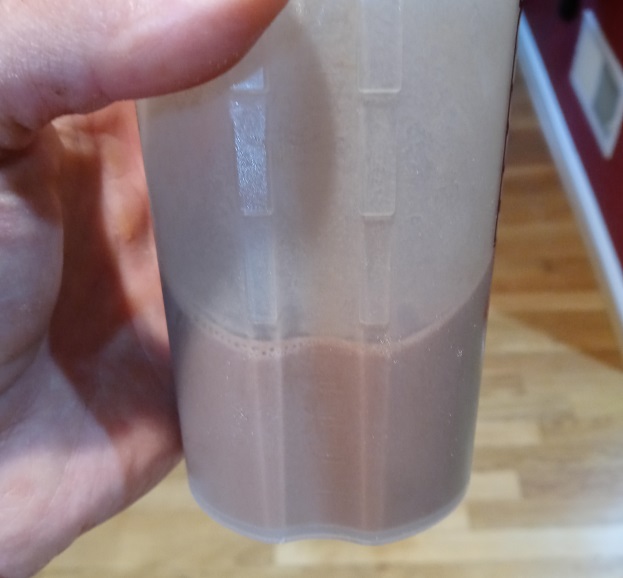 There are no visible particles with this one.

I mixed it in 7 oz water this time since the Blueberry Muffin tasted watered down in 8 oz. I think this helped because the flavor was definitely stronger. I liked how it was a little thicker. Even with 1 oz less water, there were no clumps. It has a pretty true chocolate brownie flavor. There is a slight dirt taste to it. You still get that vegan protein mouthfeel. There is a noticeable plant-y aftertaste. Don’t take multiple drinks right after the other. The aftertaste from the first will fuck with the taste from the proceeding drink. This is the best vegan protein I’ve had to date, definitely better than the Blueberry Muffin. I imagine it would taste even better in milk. Now would I buy it over a whey chocolate brownie, no. But this is a very good vegan option.

I tried out BEAM Pre Workout, both sample packets. Here is how it mixed up: 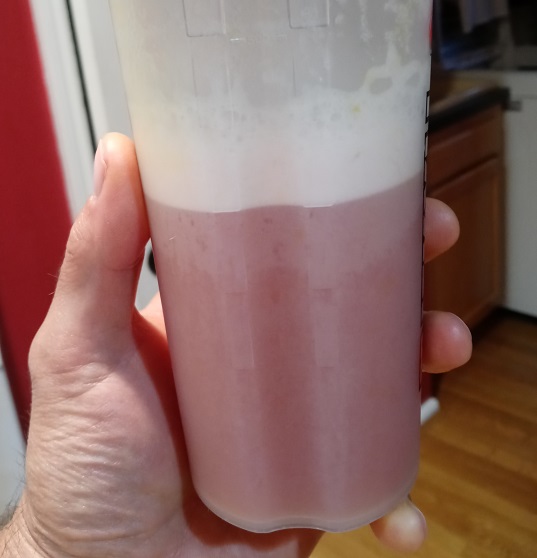 The packet says to mix with 8 oz water and I can see why. At 12 oz for both, the flavor is super strong. And you get a tad bit of grit. The Watermelon Candy was delicious. It tasted like a watermelon jolly rancher with some sour added to it. I felt the BA tingles kick in hard at about the 10 min mark. They quickly subsided.

As far as effects, I can say that it’s one of those PWOs that works. The stim feeling is not over the top as you would have expected from looking at the profile. You do feel a pretty good punch from it off the bat. Then the energy never really goes away. I felt strong throughout my entire 75 min back/leg workout. I got an extra rep here and there which I was surprised because I had been using C4 Ultimate lately for this workout. So the performance is right there if not better than C4 Ultimate. For some reason I didn’t feel the focus as much as I thought I would. It was there but I didn’t get crazy tunnel vision. Maybe I needed a little more caffeine for this. During almost every workout around the 60 min mark, I feel like I ready to be done. I didn’t get that feeling as much with BEAM. My back didn’t get crazy pumped. I’d say the pump was average. This PWO reminded me that you don’t have to get crazy stimmed out to have a great workout, again, it just works.

That wraps it up for my BEAM reviews. Thanks @TheSolution!

This PWO reminded me that you don’t have to get crazy stimmed out to have a great workout, again, it just works.

This line says it all right here
A job well done with a great formula and incredible taste.
Glad you enjoyed man. If you think watermelon is good Mango Lime is on another planet.

Tried my sample pack of Whey Protein Salty Peanut Butter; mixed half of it with about 4 oz of cashew milk and it was smooth and a little thin; the taste was really good. It reminded me of PES peanut butter cup. Subjective, but that’s what the flavor reminded me of. I used the other half for a shake with a banana, oats, water and ice and it worked well there too. No complaints here, it would definitely be something I’d buy in the future.

If you grab the 4 sample packs do a full scoop with 6oz and let me know what ya think!. Thanks for the feedback. Appreciate the kind words.